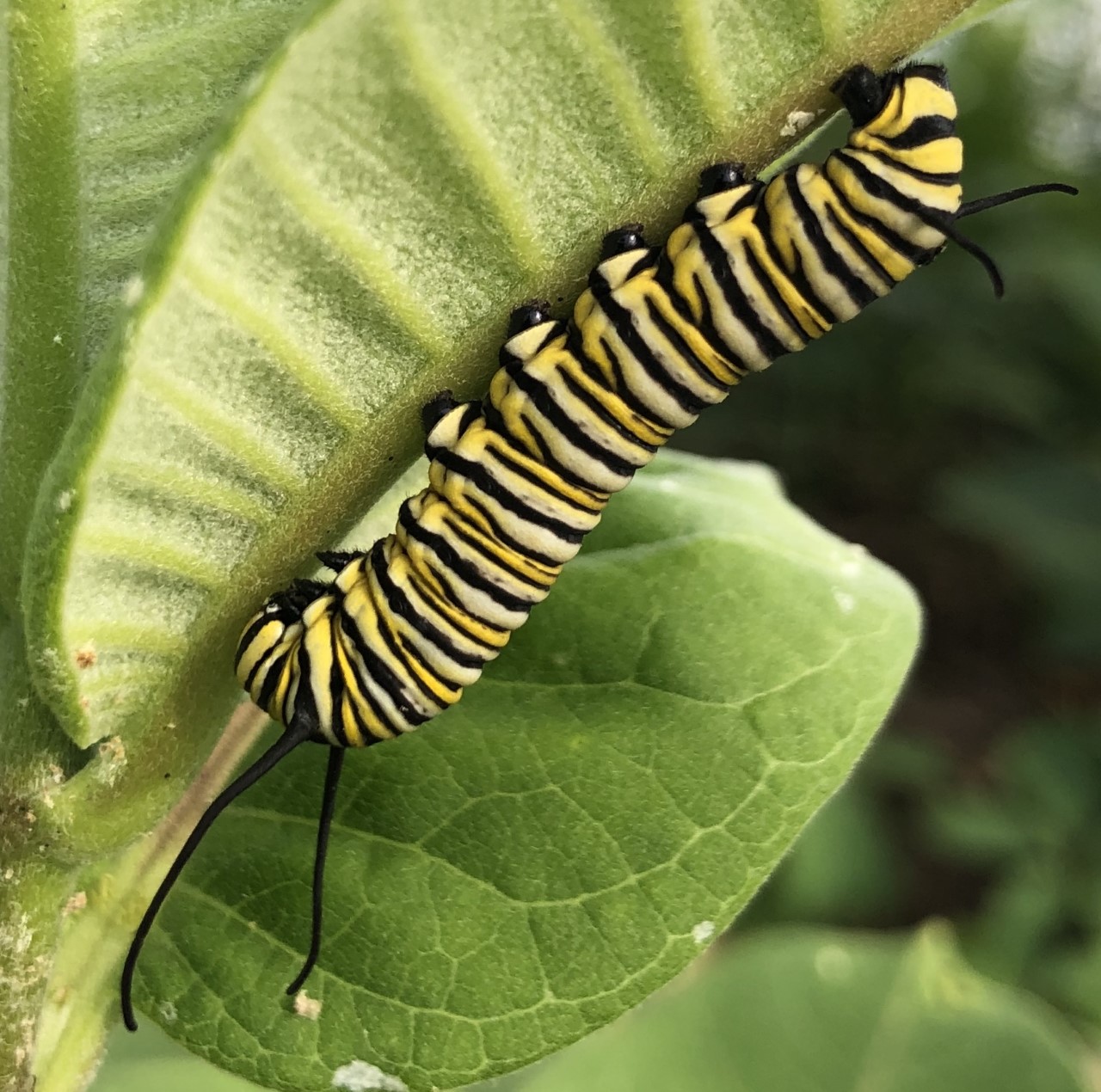 Last weekend I received a message from a woman in my town, who may just be as passionate as I am when it comes to protecting our pollinators. She wanted to know if I would be interested in raising monarchs. Ummm – yeah! Count me in! This is something she has been doing for years, some times with swallowtails and currently with monarchs. She finds the eggs – small creamy white specks on the underside of milkweed leaves and places them, still attached to the leaf, in a 10 gallon fish tank with a custom built screen lid to give them a safe enclosure to grow up in. It isn’t passive work – she cleans the tank regularly (the caterpillars poop…a LOT) and makes sure there are always fresh milkweed leaves for munching on. In turn she, and her sweet little girls, are rewarded with watching the eggs hatch, the caterpillars grow and grow and grow and then form a chrysalis from which a beautiful butterfly emerges. She then releases them to the wild, hoping they will be one of the ones that makes it but content with the knowledge that she gave them the best start in life possible.

This year in particular she had found a lot of eggs and had an abundance of caterpillars so thought of me and my boys – figuring this would be right up my alley. It is. My first step was finding a good set up. I have fish tanks but both are currently in use housing my fish. Hmmm…perhaps I should pick up a new tank? Did I have anything else that would work? And then I remembered the gigantic glass vase that I brought home from my father’s funeral a few years ago. You see every year on my birthday my dad had sent me a dozen roses – didn’t matter if I was living at home, away at vet school, or married with kids in my own house – they arrived every year without fail. And so as a tribute to him I had ordered a large flower arrangement from the florist he had faithfully used for 36 years, and they had arrived at the funeral home in the largest vase I had ever seen. And so I kept that vase and it has sat in my home office, in a corner where no one can see it (and the kids and dog can’t break it), and collected dust. What better place to raise a new generation of butterflies? I think my dad would be so proud – not only because I was doing something so beautiful with it, but also because he was the most frugal person I have ever met! I was able to find some butterfly netting from one of my kids games that happened to fit perfectly over the top. I found a couple of large sticks to provide a surface on which to attach the chrysalis – easy to do since my toddler brings home every.single.stick that he sees for his giant stick collection. And with that I was set with a free re-purposed butterfly rearing enclosure.

So lets talk a little bit about these butterflies and why it is important to help them out. The monarch, or Danaus plexippus, is the “king” or “queen” of the butterflies, hence the name – given because of its striking majestic beauty. The eggs are laid on milkweed, which is the ONLY food source for the growing caterpillars. Milkweed sap is toxic (so be careful to avoid contact with your skin and eyes, do not ingest it, and ensure children and pets are not in contact) and this in turn makes the butterfly poisonous to predators. And so the bright orange and black colouration is not in fact for beauty, but rather to serve as a warning sign not to eat them. The butterflies overwinter by flying from Canada and the Northeastern United states to find a safe haven in the olymel fir trees in Southwestern Mexico. These winter butterflies can live for up to 8 months, catching air currents to ride the thousands of kilometers down south. In contrast, the trip back North in the spring is carried out by a few generations of butterflies that stop to reproduce on milkweed as it begins to bloom – first in the Southern United States and then up the butterfly corridor into Canada. According to the David Suzuki Foundation, the population of monarch butterflies has dropped from over a billion in the early 1990s to a low of around 35 million in 2014 – a loss of greater than 95% of the population. This is largely due to loss of milkweed plants in the environment from increasing land use and applications of herbicides on agricultural crops which the milkweed plant is susceptible too. But thanks to increasing awareness, government action and great campaigns such as the David Suzuki Foundation one #gotmilkweed, these plants are beginning to rebound and along with it the monarchs are too.

So last Thursday the kids and I biked across town to pick up some eggs and young caterpillars. I’m not sure if raising a handful of them to the adult stage will have any impact on the overall population, but I think it is a great way to get my kids involved and excited about conservation. We read a book about caterpillars and butterflies and every day they help me check on the little critters. Next year I am going to put a butterfly garden on the western side of my house where I will plant the various native species of milkweed along with some native nectar plants. It may be a small step, but collectively can lead to a huge change when we all work together.