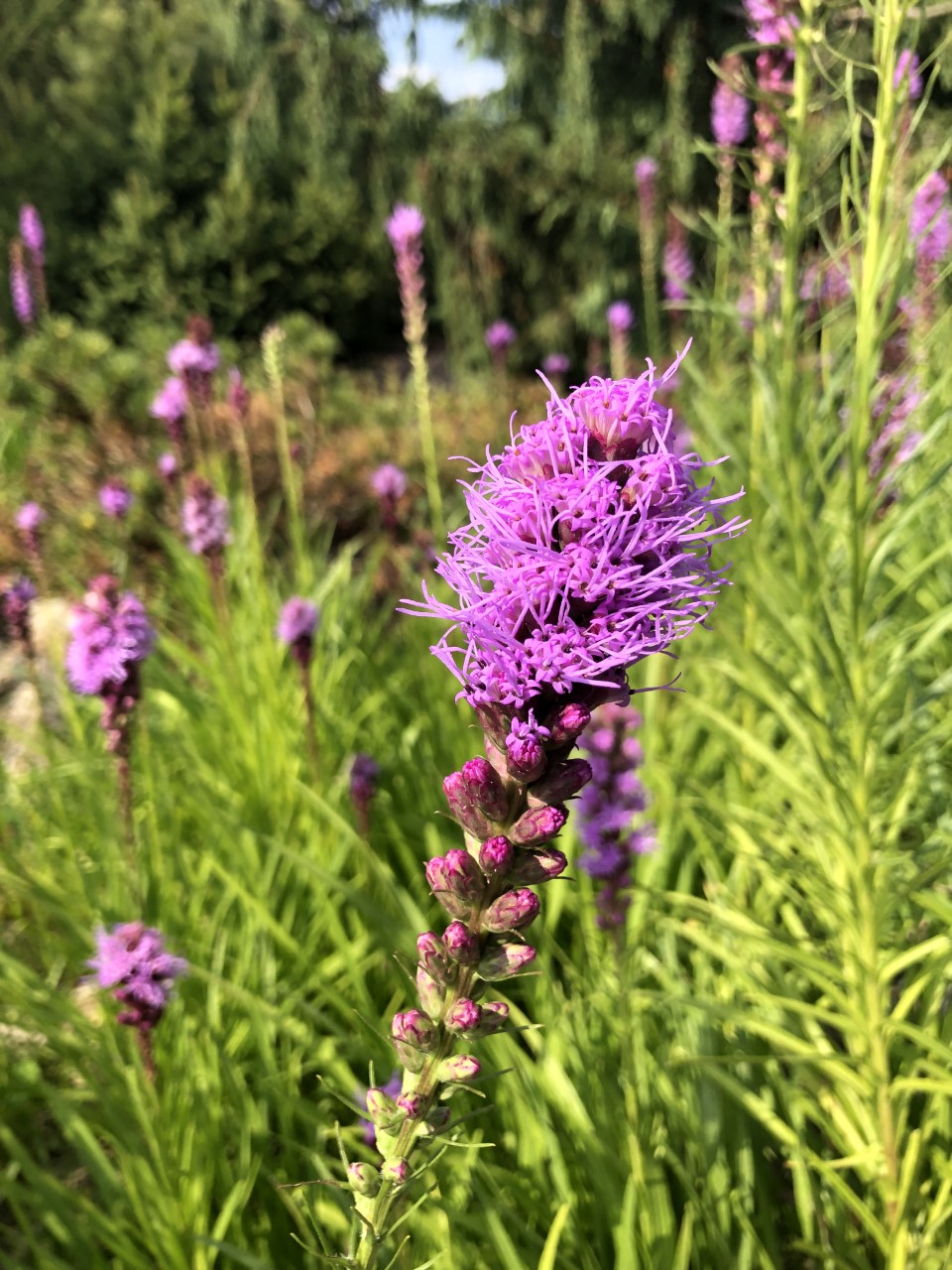 The other week my boys took me on a tour of a local, privately owned, botanical garden. It had actually been my mother’s day gift but life is so busy right now that we hadn’t had the time to go until the end of July. The gardens were beautiful – 20 acres that included an aviary, an apiary (bee-yard!), unique conifers and flowers as far as your eye could see. As we were walking along the meandering paths I was struck by a large stand of beautiful bright purple flowers – dense blazing star.

The dense blazing star, or Liatris spicata, is a very showy herbaceous perennial that is native to Eastern North America. It grows in grassland prairies and open meadows, and in Canada is only naturally found in Southwestern Ontario. It is considered to be threatened – not yet endangered but on it’s way – with the biggest threat to it being urban sprawl. This plant grows best in full sun, and moist soil and will reward the gardener with tall spikes of stunning purple flowers, that bloom consecutively from the top down. They typically grow 1 to 1.2 meters (3-4 feet), but can get as large as 2 meters (6 1/2 feet) in their natural habitat. Dense blazing star can do very well in a traditional garden setting, and in fact is one of the most common native plants that I see for sale at garden centers. I do recommend sourcing the native species to incorporate into the garden rather than a cultivar, which may typically be found for sale and may not have the same quality of pollen and/or nectar.

An interesting fact about this plant is that it can grow in soil that is contaminated with Cadmium. The plant will actually take up the toxic heavy metal and incorporate it in non-toxic form in the plant tissue. I think this gives Liatris spicata rock star status!

Pollinators love this plant! With flowers appearing in July and lasting through to September, they can be a good food source during our August nectar dearth. They are also a good nectar source for the beautiful and majestic Monarch butterfly. I was planning on using Liatris spicata in the pollinator garden at the school, but alas the native nursery that I was purchasing from was sold out. I did plant Liatris cylindracea, or Cylindrical Blazing Star, which is very similar but instead of the tall spike they have little clusters, or tufts, of flowers that remind me of fireworks.